Six Reasons Working From Home Is Less Awesome Than You Think

Two years ago, when my boss announced that our team would now be working from home, I couldn’t believe my luck. I felt like I had won the Powerball Jackpot of the professional universe.

I hated commuting. Hated it more than a convict hates a cell. Relieved of that daily aggravation, I am a calmer and happier person. I now exercise during the time I used to spend seething in my car. I hated cubicles, too. Open office spaces, with zero privacy and maximum noise, suck for introverts like myself who go a little crazy when prevented from hearing themselves think.

I work for a Fortune 10 corporation. If you’re in the United States, you’ve definitely heard of it. My team works on one of the company’s many websites. We’re all at the computer constantly. So we can do our jobs from our couches just the same as if we drove to an office. A huge bonus: I am home when the kids get off the bus, so we don’t pay for after-school care.

It’s been life-changing. But it’s not all unicorns and glitter. There are a few downsides to working from home.

(1) Forgetting what your colleagues look like. Luckily for me, I have met most of my colleagues in person, because we’d worked in the office together before working from home. But over time, your flesh-and-blood co-workers become disembodied voices on the phone, like ghosts. Our team has a couple of new guys I’ve never met face to face. If I’m on a conference call with two people who happen to have very similar voices, I just pray they at least work in the same department because they are pretty much the same person as far as I’m concerned.

(2) Having no idea what’s fashionable anymore. When you rarely leave the house, you don’t notice trends in hemlines, inseams, rises, shoes, or anything else. Are tights still acceptable? Leggings? I have no idea. Watching runway shows wouldn’t help, because normal people don’t wear that stuff anyway. I’d go to the mall, but who even goes to the mall? I’ve bought all my clothes online for years. My old work wardrobe hangs neglected in the closet, but that’s OK, because it’s probably out of style anyway.

(3) Ending up with all the home chores. It starts out innocently enough. You’re home during the day, so naturally you let in the plumber, the meter reader, the cable guy. Soon you’re booking those people, too, because you’re home to notice when things break, and you have time to call them. It’s easy to throw in a load of laundry during a break. But it’s a slippery slope. Over time, unless you deliberately delegate these things to others, you may become the household’s main garbage-taker-outer, dog walker, dishwasher emptier, school event attender, ice cube tray filler, and laundry folder.

(4) Getting lazy about certain things. I don’t sit around in my pajamas all day. But I definitely don’t dress up, either. I bought extra jeans because I was wearing jeans nearly 365 days a year. I almost never put on makeup anymore, and I hardly do a thing to my hair. When you’re home alone all day, if you need to blow your nose, or clip your fingernails, you just do it, even during conference calls. That’s what the mute button is for.

(5) Awkward video calls. When you work at home by yourself, you get used to nobody noticing or caring what you look like. Then, when you have a video call, the laptop camera seems like a giant Eye of Sauron through which your co-workers can stare at you. It’s enough to make you very self-conscious. I had no idea I had Resting Bitch Face until WebEx presented me with the evidence. Then there’s that one co-worker who forgets she’s on video and picks her nose or cleans her ears with a Q-Tip. Your jaw drops, but then you quickly fix your face back to neutral, because you’re on camera too.

(6) No water-cooler conversation. Introvert or not, I miss chatting with co-workers. And if I bake too many cookies one day, there’s no work kitchen where I can leave them on the counter and make people happy.

Overall, though, I’d say the positives of working from home outweigh the negatives. It’s all good, as long as you don’t break the cardinal rule of conference calls: Never Let Them Hear You Flush.

Their hold on me had long since loosened. But I felt Darien’s hands days later.  I felt them across the conference room, Monday after the office party. I felt them when his eyes followed me out the door.  Something had to give. Closing my résumé, I inhaled, and dialed HR.
Read more

How to Survive a Surprise Day of Pandemic Insanity

Wake up rested and ready to face Tuesday. Kid #1 may be staying home with a sore throat, but Kid #2 got on the school bus successfully, lunch packed, water bottle full, and mask on, so that’s a win!  Walk the dog. Several blocks from home, answer a call on your cell. Listen to someone at your kid’s school insist that you pick up Kid #2, who isn’t sick. Listen as they explain that the school district’s COVID-19 plans, which they’d sent to parents in the form of an indecipherable flowchart, require all children in the family to stay home if one child has even a single symptom of COVID-19. Ask questions. Listen to them say that all four members of our household must either have negative COVID tests or quarantine for 10 days before the kids are allowed back. Question this directive, which differs from the guidance you recall reading, and be told to expect a call from the school principal.  Drop off the dog and drive the old-clunker car to school. While driving home, explain to a perplexed
Read more 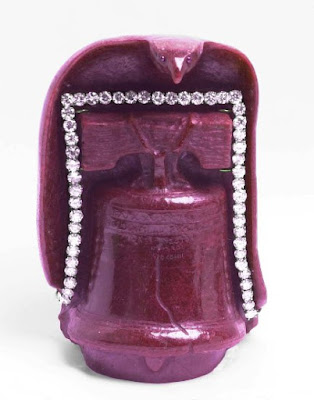 Without its diamonds, it was a beet-hued hunk of junk, an Americana tchotchke. Stolen, never recovered, the news had said. Dialing, she held the Liberty Bell Ruby to the sunlight. “Larry,” she said, “you’re not gonna believe what I just got at a yard sale for seven bucks.” Writing Prompt:  Include the words ruby and seven
Read more